nBox Recorder is a network traffic disk recorder application. With nBox Recorder you can capture full-sized network packets at gigabit rate from a live network interface and write them into files. It has been designed and developed mainly because most network security systems rely on capturing all packets (headers and payload), since any packets may have been responsible for the attack or could contain the problems that we are trying to find.
nBox Recorder uses the industry standard PCAP file format to dump packets into files so the resulting output can be easily integrated with existing third party or even open-source analysis tools like ntop, Wireshark. or Snort.

nBox Recorder can be effectively used to perform: 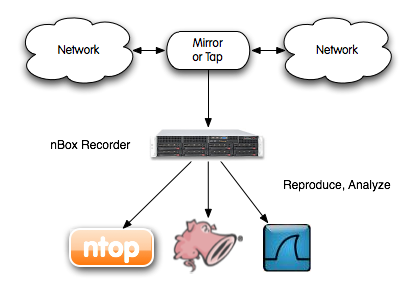 The nBox recorder is available as physical appliance in the models below.

Please contact us for details, price and availability, or get in touch with our resellers.