PF_RING™ is a new type of network socket that dramatically improves the packet capture speed, and that’s characterized by the following properties:

If you want to know about PF_RING™ internals or for the User’s Manual visit the Documentation section. 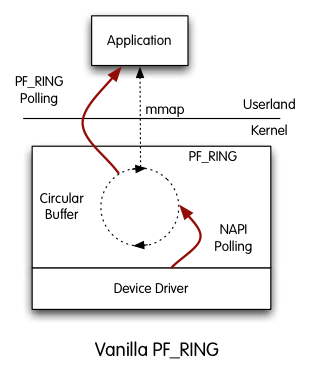 PF_RING™ is polling packets from NICs by means of Linux NAPI. This means that NAPI copies packets from the NIC to the PF_RING™ circular buffer, and then the userland application reads packets from ring. In this scenario, there are two pollers, both the application and NAPI and this results in CPU cycles used for this polling; the advantage is that PF_RING™ can distribute incoming packets to multiple rings (hence multiple applications) simultaneously.

PF_RING™ has a modular architecture that makes it possible to use additional components other than the standard PF_RING™ kernel module. Currently, the set of additional modules includes:

Basically everyone who has to handle many packets per second. The term ‘many’ changes according to the hardware you use for traffic analysis. It can range from 80k pkt/sec on a 1.2GHz ARM to 14M pkt/sec and above on a low-end 2.5GHz Xeon. PF_RING™ not only enables you to capture packets faster, it also captures packets more efficiently preserving CPU cycles. Just to give you some figures you can see how fast nProbe, a NetFlow v5/v9 probe, can go using PF_RING™, or have a look at the tables below.

PF_RING™ kernel module and drivers are distributed under the GNU GPLv2 license, LGPLv2.1 for the user-space PF_RING library, and available in source code format.

* This work is the result of the last couple of years of self-funded research. We therefore ask you a little help to keep the project running. Nevertheless if you’re a no-profit organization, professor or university researcher, please drop us an email and we’ll send it to you for free.